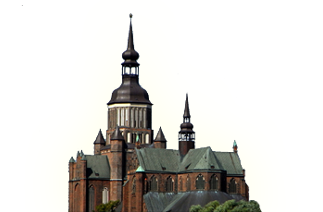 In 1660 the two music galleries were installed in the nave of St. Mary’s in conjunction with the (then)
newly built organ. They made it possible to have multiple choirs perform simultaneously, as was customary
in the large churches in the northern Germany cities in the mid-17th century.

Both galleries have been preserved to this day in Stralsund. They enable us to enjoy uniquely faithful
performances of northern German church music from the renaissance and baroque periods.